Latest news: Sienna Miller will attend the Siena film festival (she would have to with that name, wouldn't she?) for the premiere of Rachid Bouchareb's "Just Like A Woman". Wednesday 3rd October, 9pm - Hotel NH EXCELSIOR, piazza La Lizza. Entree is for FREE, but come early to be sure to get a seat.

The Terra di Siena Film Festival is in its 16th edition. Being much smaller than the Venice or Rome film festivals, Terra di Siena nevertheless manages to bring important world premieres and an impressive flock of Hollywood stars to the city of the Palio. Past editions saw stars like Colin Firth (who's married to an Italian) and Susan Sarandon participating. Telling from the festival's website, it seems that the 2012 edition may even bring to Siena the presence of Robert Redford. 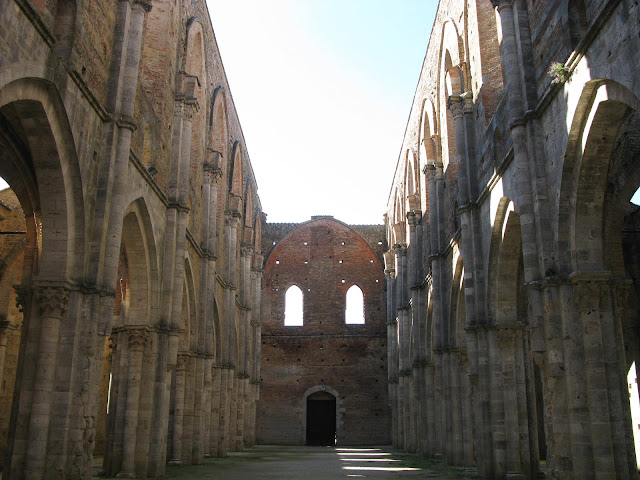 
The American director and actor has recently produced Buck, a documentary about Buck Brannaman, one of the horse trainers who inspired Redford's Oscar nominated film Horse Whisperer. The Terra di Siena festival secured the first Italian showing of Buck, which will take place on Sunday in the small southern Tuscan town of Monticiano. Tied in with the showing of the film are a series of events demonstrating the work of today's horse whisperers.

The opening ceremony of the festival will take place on Saturday night in the stunning San Galgano abbey. The roofless church and the ruins of the Cistercian monastery are an inspiration to amateur photographers and cineasts alike (the final scenes of Tarkovsky's Nostalghia were shot in the abbey). But there is another reason why San Galgano makes for a perfect backdrop for the festival's opening night. The screening of Walt Disney's The Sword in the Stone (Saturday 29th, 7pm) couldn't take place in a more adequate setting. Both Hollywood film and Tuscan abbey are linked to a famous sword: Disney's to the legendary one of King Arthur, and the one  on display at San Galgano abbey's Montesiepi church (stuck in stone) to the life of the Saint Galgano.

After the go ahead in Monticiano and San Galgano the festival will move to Siena for the rest of its program. The week will see the premieres of various films (Black Bread, Mein bester Feind, Strada Verso Casa, to name but a few). The storylines of all movies link in well with the festival's decision to dedicate Terra di Siena to the screening of films focusing on social and political themes.

My favorite event of this year's edition of the festival is the tribute to Italian legend Anna Magnani. One of the biggest talents of Cinecittà, the actress is often a little known name abroad. Connaisseurs say, this is so because Magnani doesn't impart Italian beauty the way Sofia Loren, Gina Lollobrigida or Claudia Cardinale do. Bullocks! The Roman actress wasn't just incredibly talented (she was the first Italian to win an Oscar in 1955 for her performance in the Rose Tattoo, written for her by Tennessee Williams), but also truly beautiful. But to recognize this, one may have to move beyond contemporary stereotypes when watching her marvelous films.

TERRA DI SIENA FILM FESTIVAL, 29th of September to the 4th of October 2012
To read the program in English scroll down to the bottom of the film festival's page I linked to above. Follow on Twitter (@SienaFilmFest) or like the festival's facebook page for updates on the week's events and film's screening times.