EMIGRATION VS. IMMIGRATION: A MEMORY OF ITALY IN THE FIRST WORLD WAR 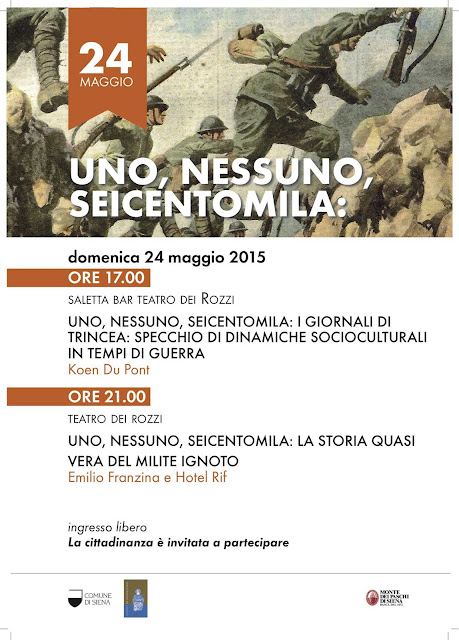 Understand a bit of Italian? This is the night to figure out how much regarding a topic that seems a bit removed but actually isn't at all.  Italy entered the first world war exactly a hundred years ago on the 24th of May 1915. 600'000 Italian soldiers died during the war. Many of them were 'Italians' born in Brasil or Argentina who traveled to Europe as young men to fight for a country they had never put foot on before. 150'000 of Italy's soldiers in the first world war had been born in Brazil, Argentina and other countries their parents had had to migrate to for a better future abroad. An important fact to consider when we read the daily headlines regarding todays incessantly growing immigration to Italy and Europe via Lybia.

'La storia quasi vera del milite ignoto' is told by Emilio Franzina, the writer of the book with the same title, which tells the story of a young soldier born in Brasil to Italian parents of Venetian heritage.

In case your Italian isn't quite there yet, just come for the musical interludes by the extremly talented four musicians and singer Sabrina Turri of Hotel Rif and for the beautiful ambiance in Siena's teatro dei Rozzi.

If you want to catch Hotel Rif on a lighter note visit Montalcino on Wednesday 27 for the band's sunset view concert in Sant'Angelo in Colle.